Genesis of the Film

Adam Nemett began writing THE INSTRUMENT while spending the summer of 2000 backpacking through the mountains of Shikoku, Japan. Nemett, an award-winning graduate of Princeton University’s Creative Writing department, initially intended THE INSTRUMENT to take the form of a novel. When the heavy emphasis on music and dance made the story more conducive to the multi-sensory medium of film, Nemett began adapting a screenplay in the Summer of 2001, and completed it during a Fiction Workshop taught by author Joyce Carol Oates in Spring 2002.

Rather than invent wholly fictional characters from scratch and then find actors and actresses to assume these roles, Nemett attempted to base the seven student characters on the actual people who might play these parts.  The plan was to do several takes of each scene as scripted. But many of the scenes would also be improvised, with the likelihood that these scripted and improvised versions would be edited together to achieve a certain naturalness and spontaneity. 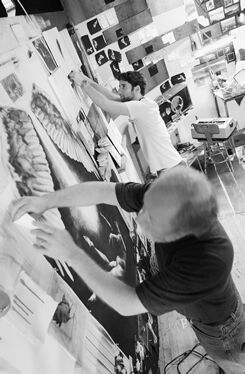 While formulating his core group of actors and writing a flexible script around their personalities, there was also the matter of constructing the primary sets for THE INSTRUMENT: namely, the 30’ X 30’ sanctuary and ritual elements created by fictional character, Arthur Zarek.

In order to do this, Adam and his father, Barry Nemett, organized a semester-long course at the Maryland Institute College of Art (MICA), one of the top fine arts schools in the country. Together, they hand-picked a group of 25 visual artists from various disciplines to collaborate on the production design of the film, all under the auspices of a credit course called “Art & The Instrument”.

To foster the collaborative spirit of the project, and to better explain the different facets of the project, several Princeton-based members of the cast and crew traveled to Baltimore throughout the semester to lead the classes. Essentially, the construction of the space depended on two main aspects: fleshing out the fictional character that created the space, and further developing his seven ritual ceremonies.

The character of Arthur Zarek, our semi-fictional visionary, was essentially a conglomeration of five real-life personalities:

Harry Partch — a musician and legendary composer, famous for developing a system of musical theory based on 43 tones per octave (instead of the standard Western theory based on 12 tones per octave). He called this system "Just Intonation" and built an arsenal of musical instruments — each of them sculptural in nature and requiring a certain amount of dance-like movement in order to play — all capable of actualizing his system of Just Intonation. Partch proceeded to compose works based on a sort of ritual musical theater, which he called “corporeal music,” and staged numerous performances incorporating elements such as Noh drama, opera, and filmmaking.

James Hampton — a Washington D.C. custodian and "visionary" artist, legendary for the post-humous discovery of his life’s work, an installation known as “The Throne of the Third Heaven of the Nations' Millennium, General Assembly.” The installation, constructed over a 14-year period in an anonymous garage space, includes 177 objects -- furniture, altarpieces, and shrines — each meticulously wrapped in aluminum and gold foil. It is assumed that Hampton was creating a sacred church space that would eventually be used as a functional sanctuary, with himself serving as minister. The work of folk art is considered by some to be “the finest work of visionary religious art produced by an American," and now sits in the permanent collection of the Smithsonian Institute in Washington D.C. 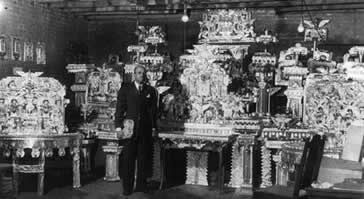 Perry Cook — Princeton associate professor of Computer Science and Music, Cook has created over a dozen digital musical instruments, including an electronic didgeridoo  and even a digital musical coffee mug. Cook’s desire is to create an “augmented reality” by using a computer to model a real-life sound, and then creating any number of “controllers” to manipulate these sounds. In other words, by hooking up a digital sensor to any physical object, a human can use a computer to change the nature of the sound produced by that object. Ajay Kapur, who played “Nirav” and served as Director of Music for the film, worked with Cook during his senior year at Princeton to create an electronic tabla (later used as one of the instruments supposedly created by Arthur Zarek).

Rev. Richard Kalter — An Episcopal priest serving as Philosopher-in-Residence at Maryland Institute College of Art since 1979, Richard Kalter was the natural choice to assume the role of Arthur. Kalter was largely regarded as the spiritual center of MICA, and touched countless lives over the course of his twenty-five year tenure at the Baltimore institution. Sadly, Richard Kalter passed in November 2004. He will be remembered as a sage, a counselor, and as a friend.

Rabbi David A. Cooper - A master of Jewish Mysticism and meditation, Cooper was also a student of Sufism, Zen Buddhism and Tibetan Buddhism, and wove these different contemplative traditions and practices together to heavily influence the Jewish Renewal Movement. He has written seven books, including national best seller God Is a Verb. With thousands of students around the world, Cooper and his wife Shoshana have led countless silent meditation retreats, and his teachings and chantings heavily influenced the spiritual system of sound and silence appearing in The Instrument. David Cooper passed in July 2020, and his mentorship, friendship and "tikkun" will have a lasting impact.

In the Spring of 2002, 25 visual artists gathered at the Maryland Institute College of Art (MICA), one of the top visual arts colleges in the nation, to create the sacred space and ritual elements used in THE INSTRUMENT.  They were given no production sketches or rules to follow. The process was entirely spontaneous and collaborative — the room came together bit by bit, with multiple artists often working on the same space of wall, the same costume, or the same electronic musical instrument.

This method of production design — the maximum amount of artistry with the minimum amount of expense — exemplifies the sort of improvisational spirit explicitly dictated by budgetary constraints.  THE INSTRUMENT is a feature film completed on a production budget of $9,000. Such a small budget meant that certain choices were made in order to keep costs down.  While some of these choices were indeed founded in practical constraints, the script, the manner of filming, and various other elements of production were structured in such a way as to use these seeming limitations to an artistic advantage.

Since the production did not have the budget to pay for room and board, the entire production cast and crew (nearly 30 of them) lived in the director’s house for the month of June, sleeping ten to a room at times. While the living arrangements were, in a sense, less than ideal, the intensely concentrated atmosphere actually mimicked the plot of the film — a diverse group of people thrown together for one month with one common goal — and thus, aided in developing the culture necessary for the cast and crew to play their roles effectively.

Evenings at the Nemett house were not filled with relaxation.  Everyone was engaged in some aspect of production at nearly all times — the costume designers constructed ritual garb in the den, the musical directors were composing and recording drum loops in the kitchen, actors practiced choreography in a vacant bedroom, all to ensure successful performance of a ritual scheduled to be shot the next afternoon.  In the most real sense, we were all actually experiencing the same process being fictionally presented in THE INSTRUMENT’s screenplay.  The line between fiction and reality became wholly blurred. It was quite a ride.

Since the actors were very often engaged in the same process of preparation for ritual performance as was scripted, the cast was asked to refer to each other by character names for the entirety of the month.  This way, the camera operators could shoot constantly and capture serendipitous moments of method acting.  Indeed, many of these golden unscripted moments did end up in the final cut.

After a two-year edit, the final cut represents a creative collaboration between professors and students at two of America’s premiere institutions of higher learning. In addition to the feature film, THE INSTRUMENT has spawned a novel (“Verity’s Million”) and a critical analysis (“Unlocking The Instrument: A Critical Companion to the Film”).